No FO but a little story...

Today is definitely not FO Friday!  The cardigan I started last week is not yet finished, but I can post a WIP photo: 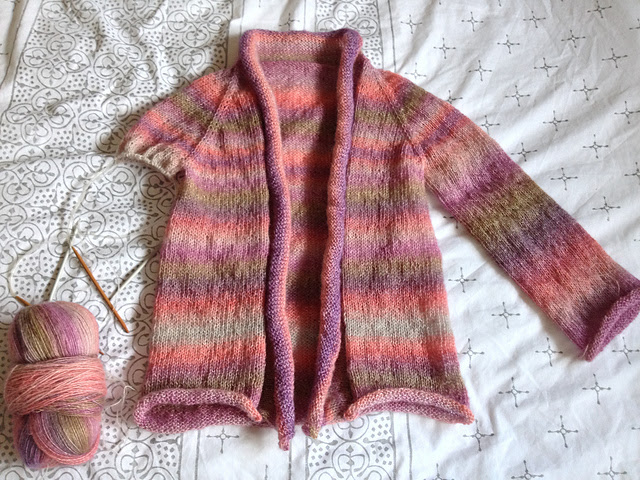 As you can see I'm not far off, only got one more sleeve to do. I'm making the sleeves longer than the pattern called for, and I've also lengthened the body as I don't like my cardigan hanging about my waist. It doesn't look like I'll get a matching second sleeve in the colour sequence but I don't mind. The front edging rolls terribly at the moment, hopefully blocking will sort that out. Oh, and I didn't make button holes, think I'll leave it as it is and use a pin when I want it fastened.

That's all my news on the fibre arts front, but I would like to share a little story from my other life if I may. In the non-fibre world I am a professional interpreter working in the English/Mandarin language pair, and to be precise I am a Community Interpreter, meaning I don't work in glass booth with a headphone but rather I work in community settings which range from court rooms to hospitals, from police stations to schools, from employment services to correction services, etc. What I like about my work is that no two days are the same and you never know what you will get even when you know where you are going. For some time now I'd thought about keeping an interpreter's diary but as you know, I'm prone to be lazy so nothing has been done. But if you don't mind I might use today's opportunity to test the waters, so here it goes...

I was booked to visit the MRC (Metropolitan Remand Centre) with a psychologist during the week, who was writing a report on the (Mandarin speaking) inmate we were seeing for a parole application. As our meeting was drawing to a close we heard the announcement over the Tannoy system (loud speakers) that there was going to be a headcount in 10 minutes. Now if you are a regular visitor to the prison, as I am, you would know that when there is a headcount no one moves except the guards. The psychologist had other clients to see there so she quickly wrapped up the meeting and signed my job sheet so that I could run out before the count starts. Unlucky for me, I only managed to get through two sets of doors to reach the inner reception when the count started, so I was stuck. Even more unlucky for me, the headcount didn't go smoothly meaning the first count didn't tally up so they had to do it again, and it was clearly not my lucky day because the second count didn't tally up either, so the whole prison was in lockdown.  As I had nowhere to go and nothing to do (no phones allowed beyond the first reception) I got chatting to the guard on the inner reception and he told me a story about one of the inmates that was so incredulous that he had to look up that guy's file to confirm it was true:

This man went out shopping with his wife, upon returning home they found a man on top of their roof trying to gain entry. He shouted and his wife called the police, the (potential) burglar panicked and slipped down from the roof and injured himself, then our man hit him out of rage. The police arrived and arrested both men, after questioning our man got prosecuted for assault and sentenced to two months imprisonment, the other guy walked free because no crime had been committed. The kick in the teeth was that this inmate was ordered to pay $10,000 compensation to the potential burglar because that guy got injured from slipping off the roof at his house!

Seriously you can't make this up, and I'm lost for words. Oh well, at least the heads did eventually add up otherwise I'd be posting this entry from within the MRC!