The Beginning of a Sweater ....

Last week I told you about my visit to a sheep farm and the fleece I bought to make a jumper for the old man, this week I can report that I had started the long arduous process of making that sweater. I say arduous not because it's really that hard but the reality presents various difficulties...  The concept is easy right? First you spin some yarn, then you knit the sweater. Well that's the idea, but as soon as I started spinning, no, as soon as I was about to start spinning I realised that I had some decisions to make.

First of, since I started spinning two months ago my yarn has got progressively thinner and thinner, to the point that I was spinning lace weight pretty much all the time. I have no intention of making a man's sweater in lace weight yarn, or even finger weight yarn. But if I were to have at least double knit weight yarn with my regular lace weight handspun I would have to make it into a 8 ply, and that would be very time consuming and tedious. Also, the fleece/wool has a shorter staple than the corriedale and BFL I have been using and it's really quite fine, therefore making it a little hard to spin fine yarn (for me anyway). So I thought I would try a semi woollen or semi worsted approach in the hope that a) I would get a thicker yarn; b) it would be quicker to spin. So now I have a plan.

Secondly, I needed to decide whether I wanted to spin in the grease or to scour it first. Since the fleece is a coated one and there is hardly any VM,  my lazy streak kicked in and I started with spinning in the grease. But somehow this fleece is a bit too greasy for me, so I scoured it. And because it's so fine it matted (not felted thank goodness!) in the scouring process, therefore I had to card it rather than just flick it before I could spin. One thing led to another and before I knew it I was making rolags, which turned out to be perfect for my purpose! It's all part of the plan of course, ahem.... 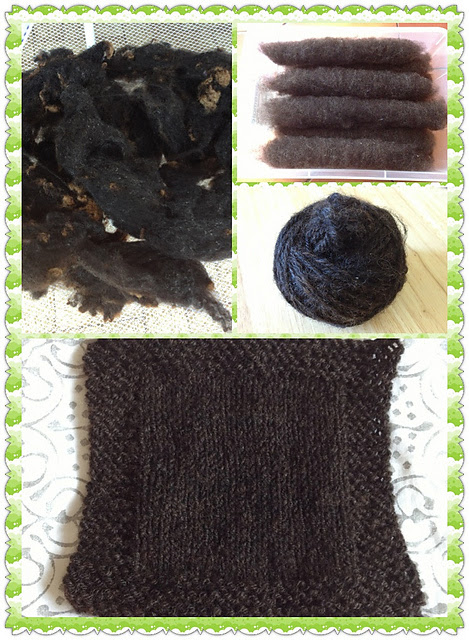 There you have it, in the picture above from top left to bottom are the steps I've been through this week: scoured fleece, card it into rolags, spun yarn (semi worsted & N-plied) and a swatch! Yes, you are not seeing things, I did make a swatch. I spun this sample mini skein to check whether it's doable before I start on the mass production, and it seems to have worked. I'm pleased with the navajo ply which gave the yarn some body, but my yarn is not consistent as you can see from the swatch, the bottom part is wider than the top part, that's because that length of yarn is thicker. Keeping it consistent is going to be a battle of wills between my fingers and my brain!

I also started a new project this week, well I really didn't have a choice if I were to complete the International Seater-a-Month Dodecathon 2012 (IntSweModo2012) challenge. Whatever possessed me to take up the challenge is now back to haunt me as we head into the last month of the year and I am still two sweaters short!! 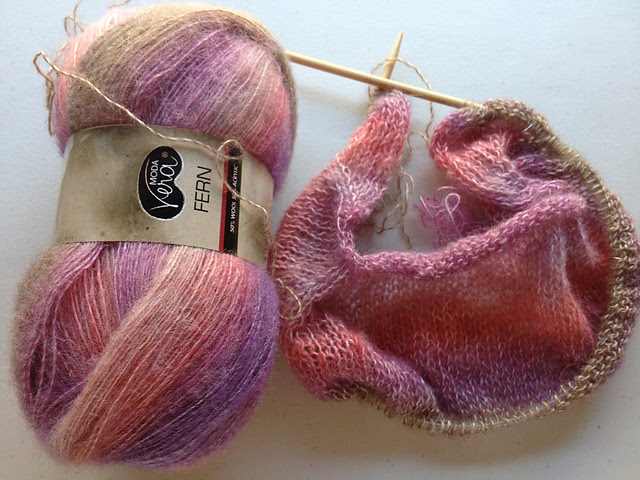 Although it's officially summer tomorrow you can never be sure with Melbourne's weather, for example the mercury hit 39C degrees (that's 102F for you folks from North America) yesterday, down to 24C today and will be lower still tomorrow, so a cardigan is always useful. Just hope I can get it finished in time, and then there's the matter of one more!!