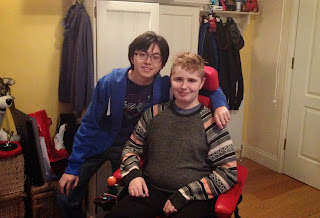 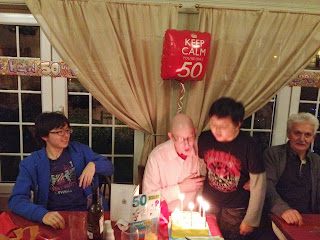 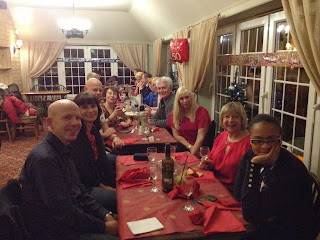 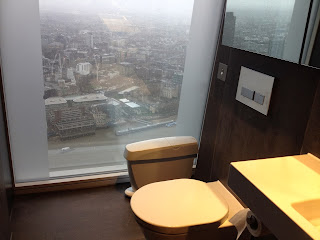 Posted by Cathy Johnson at Tuesday, December 24, 2013 No comments:

Day 5: We arrived in London in the morning of 18th December, after a 13.5 hours flight from Singapore to Zurich and another 2 hours flight from Zurich to London - it was a loooong day. But the welcome party meeting us at the airport really lifted our spirits, it's been seven years since our last visit, it's good to be back.

We really wanted to do this but didn't realise that you had to pre-book the time-slotted tour online. When my SIL pointed it out and we checked the online booking, we found that the earliest available time was 8th January which is the day after we leave England. On an off chance I called the studio in the morning and pleaded our misfortune, the lady answered the phone took my number and said if something came up she'd call me back. I never thought she would but she did, two hours later! She said she'd managed to find some tickets from their corporate partners and could we make it to the studio by 2pm? Oh yes please! So off we went...

"Hogwart" was everything we'd imagined and more, not only we get to see the Great Hall, we also saw thousands of props, costumes and scenes, all were "the real thing" that appeared in the movies. Elli got a special passport to collect special stamps at each location and he had to find snitches hidden at various places.  There were interactive displays showing different types of snow they used, how they made the special creatures like Hippogriff and Dobby the house elf and the Goblins, there's also a display of how they made the footprints in the snow when Harry was wearing the Invisibility Cloak.
We spent four hours in the studio and could have easily stayed for longer if it hadn't been for the closing time. I would definitely recommend this to all Potterites - 10 out of 10!

J had been to Legoland Windsor half a dozen times when he was younger, but he doesn't really remember, Elli has never been. Unfortunately many of the attractions weren't open at this time of the year due to the cold weather. There is a Christmas Special but really it's geared towards a much younger audience than my 16 and 10 year old. Nevertheless Elli did enjoy the visit, especially the laser rides and the Star Wars adventure.

It's been a jampacked first week, with Christmas and New Year almost upon us, the next week or so will no doubt be just as busy.

If I don't get chance to update the blog, may I wish everyone a very festive holiday.

Posted by Cathy Johnson at Saturday, December 21, 2013 No comments:

Day 4: Farewell Singapore | Around the World in 40 Days

Yesterday we went to the Adventure Cove Water Park on Sentosa Island, it was a fun packed visit. I thought we would only be there for 4/5 hours but we stayed for the whole day, and still someone (i.e. Jelly) was not happy when we had to leave at closing time, because he didn't get around to do the Splash Works and snorkeling at Rainbow Reef.

We don't have a waterproof camera so I didn't take any photos, but we do have some bird's eye view photos from the day before when we took the cable car. 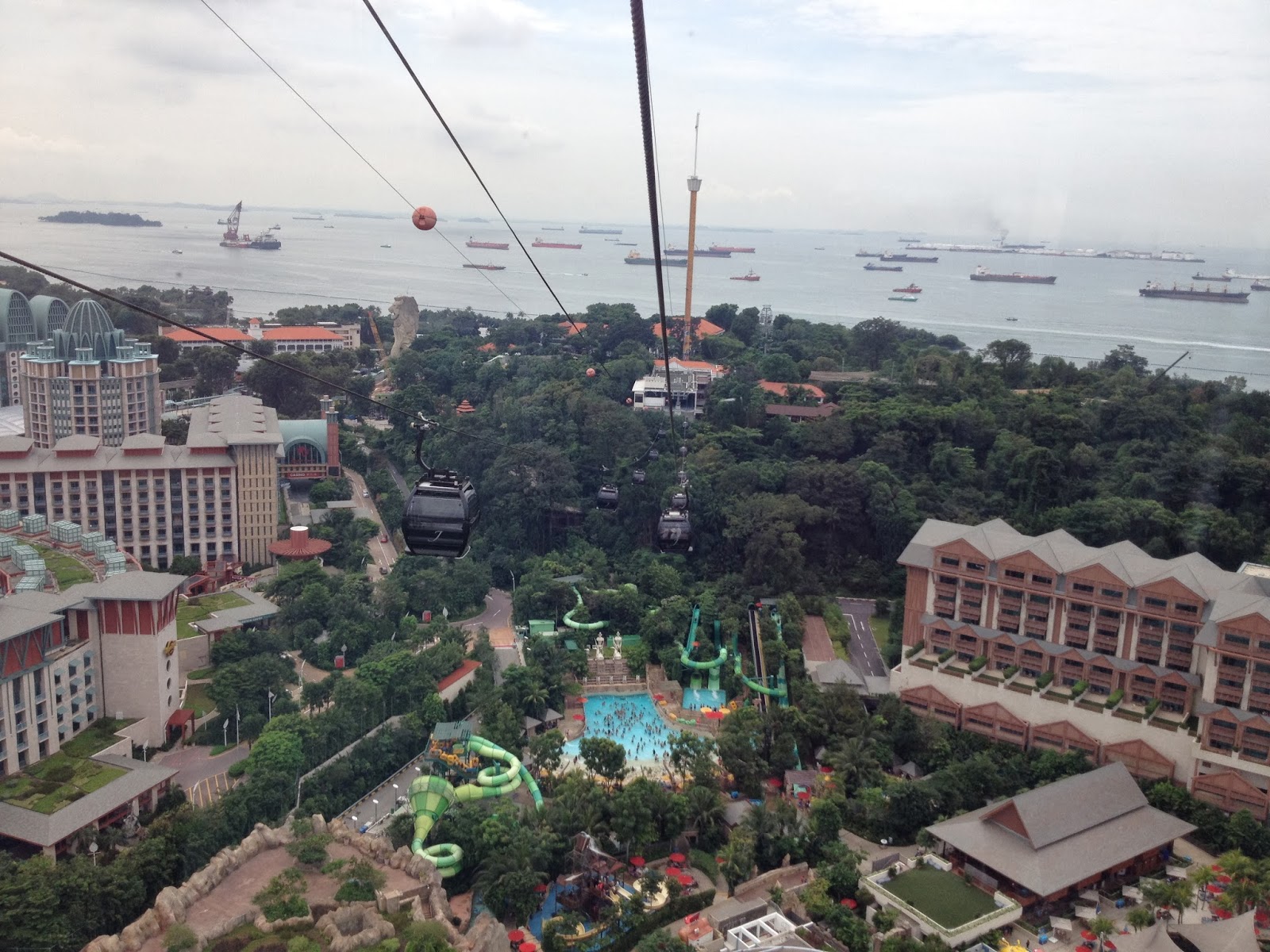 The water park was a big hit, we all had a lot of fun. The only problem we found was at the end, if you decide to stay till the closing time you risk of having to queue up for a very long time to get showered and changed. I queued for 30 minutes for the shower and during that time only 2 people came out, can't understand why someone would take so long to take a shower. In the end I gave up and just went to a toilet cubicle to get changed without a shower.

In the evening we went back to the Marina Bay Front to watch the laser light show, we read some rave reviews on Tripadvisor that it was really worth seeing. It was alright but nothing special, I certainly wouldn't call it spectacular. But the setting was nice, the bay front was a beautiful place and the ambiance quite amiable.
Singapore is a lovely place, it certainly has made an impression, even though we're only here for a very short time. This is a city that never sleeps, it is clean, efficient, very well organised and with extreme commercialism at it's highest status.

So that was Singapore, today we pack our bags and fly to London via Zurich.
Posted by Cathy Johnson at Tuesday, December 17, 2013 No comments:

Email ThisBlogThis!Share to TwitterShare to FacebookShare to Pinterest
Labels: 2013, around the world, singapore, travel


We arrived in Singapore in the wee hours of the morning, when we got to the hotel (Holiday Inn Orchard City) we were told that they didn't have the twin queen-bed room as reserved, the only one they could give us was a room with a king size bed - which is not very convenient for a family of four. They promised to change the room for us in the morning, and as compensation they added late check-out and free breakfasts. We were too tired to argue, for the night J slept on the mattress they brought in and the rest of us slept in the King size bed which was actually quite roomy.

After six hours' sleep we felt fresh enough to explore. It took us a couple of go's to get the hang of the MRT system, and we got lost a few times, but it all worked out in the end!

Photos of the day:

It's been a long day but we enjoyed ourselves. Now that we have our room sorted out I'm looking forward to a goodnight's sleep.... bye for now!
Posted by Cathy Johnson at Monday, December 16, 2013 1 comment:

After years of saving, months of planning, it is finally here. Today is the day.

This is our route map. First stop: Singapore. 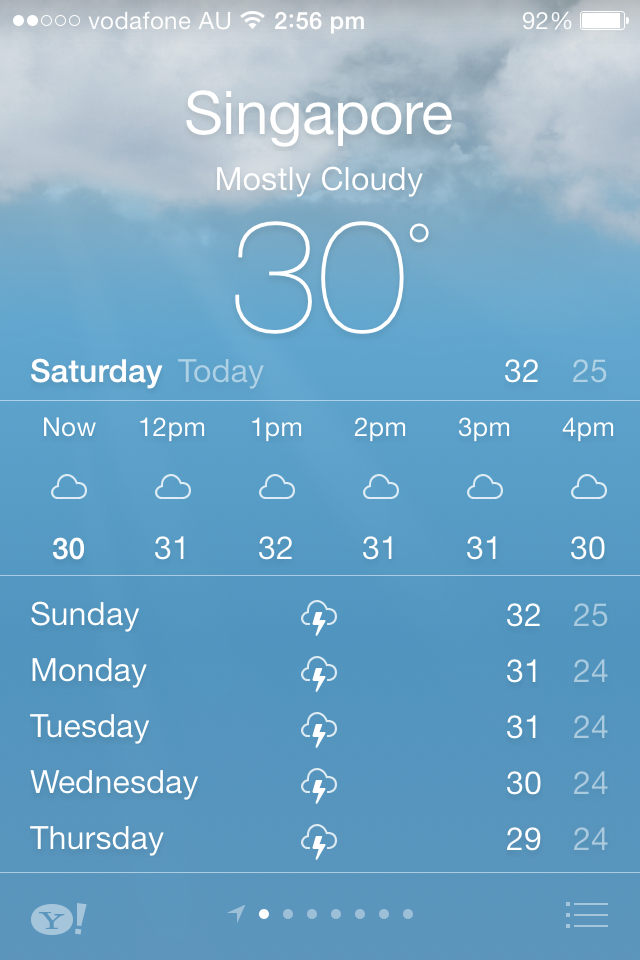 We will be in Singapore for three days, the weather does not look good. Let's hope there are gaps in between thunderstorms so we get to do some of the touristy things!

This is us all set to go! 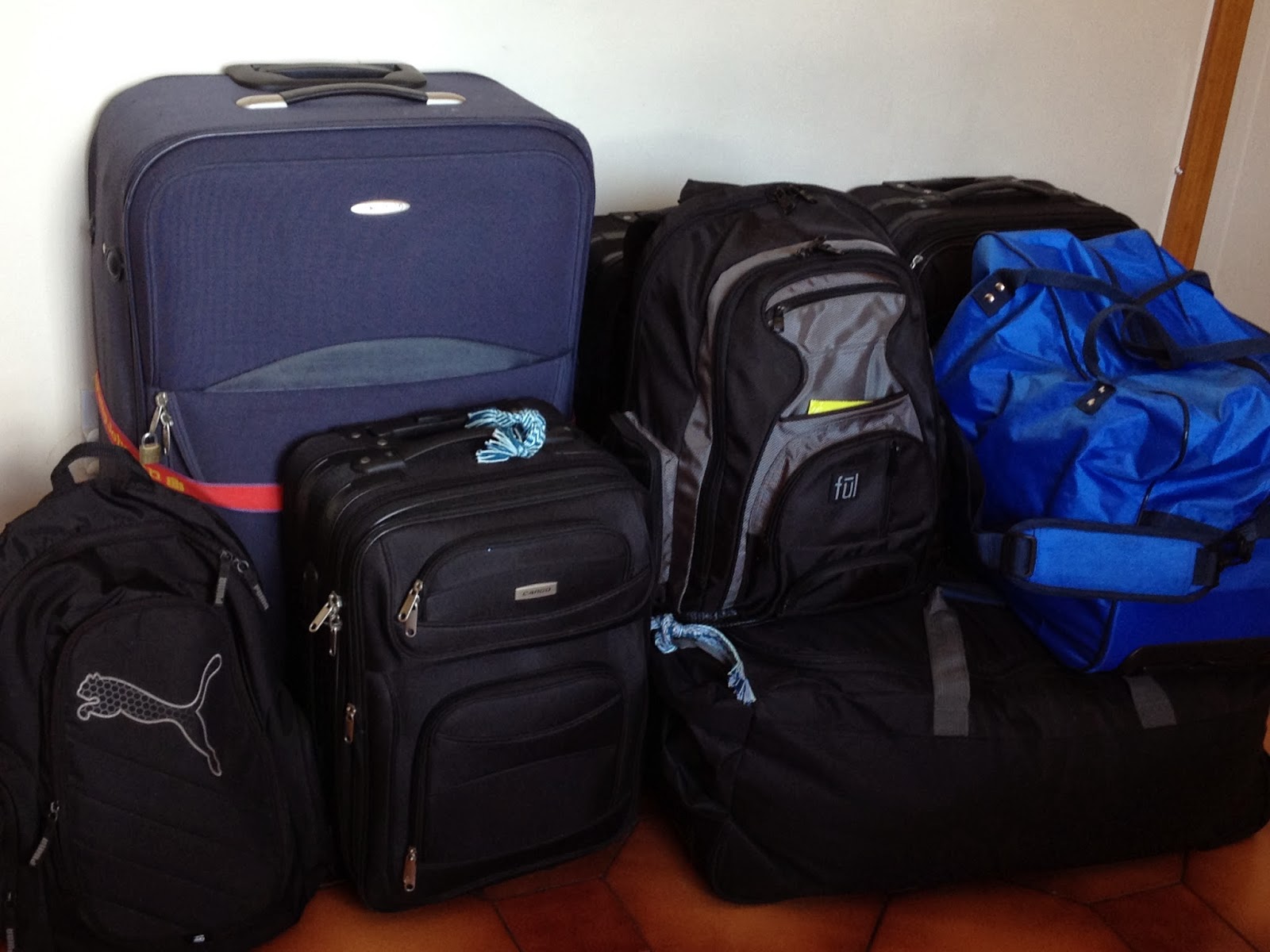 Posted by Cathy Johnson at Saturday, December 14, 2013 No comments:

Email ThisBlogThis!Share to TwitterShare to FacebookShare to Pinterest
Labels: 2013, around the world, singapore, travel 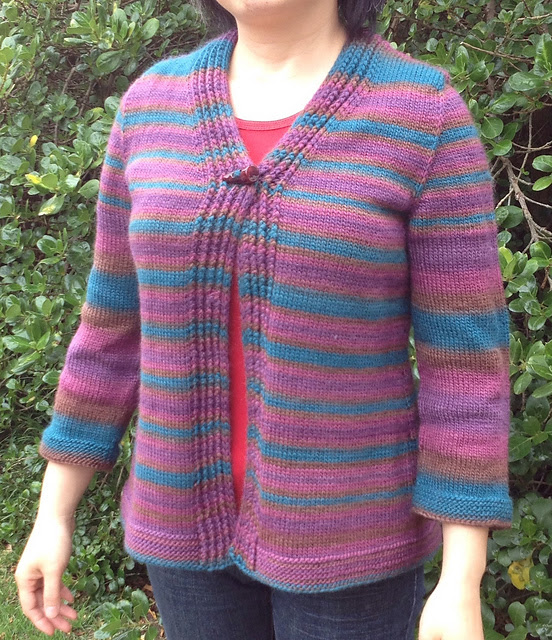 Pattern: Tric by Åsa Tricosa
Yarn: Murano from Bendigo Woollen Mills
Needles: 4mm circular
Yardage: 800m
Notes:  Tric is a lovely pattern, it appealed to me because it's knit from top-down, seamless and with simultaneous set-in sleeves. But I will say this is a tricky pattern and I'm glad it is finally done. I love how it turned out, although if I were to do it again I will add a couple more collar increases and lower the button hole to under the bust.
Mods: I didn't do the triangular pattern on the sleeves and shortened them to 3/4 length. 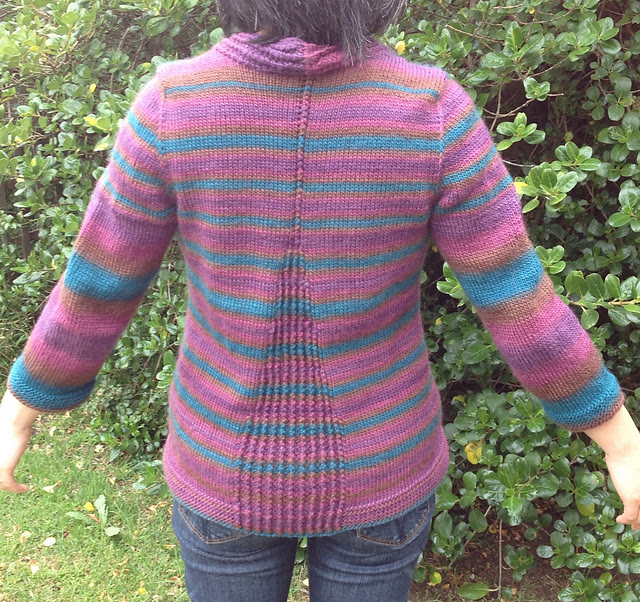 One more project which was a really quick make, once I'd figured out how to do the mobius. This is the Topsy Turvy Cowl, a free pattern on Ravelry.  The yarn is my alpaca handspun that spun up during the TdF, then later I dyed in the crockpot. 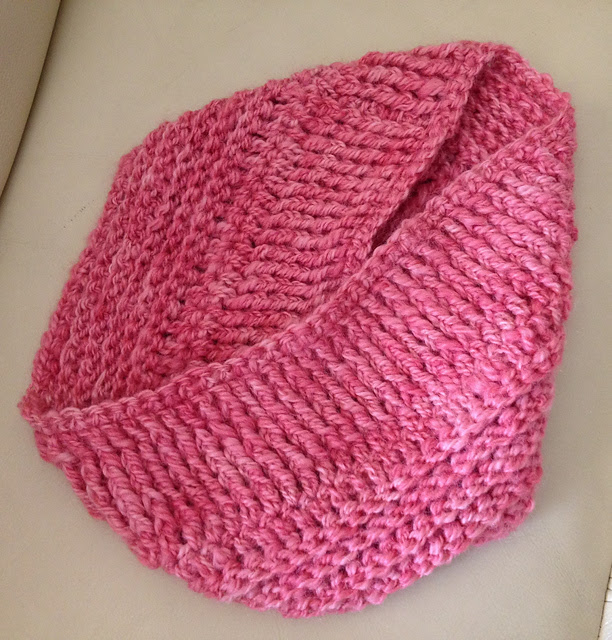 I love how the same stitch produces two different fabrics purely due to the structure without your having to do anything. Love it :D

This MIGHT be my last Fibre Arts Friday post for this year, tomorrow we embark on our big trip: Around the World in 40 Days. I'm hoping to keep a travel journal along the way, so I can share my experience with you.

Last week I showed you the big loom I bought in all its bits and pieces, today I had the good fortune of two lovely friends come help me setting it up. I had managed to persuade (ahem) DH to move the bookcase from one end of the lounge so that I could bring the loom inside.

After unwrapping everything we found out the loom is actually a Finlandia 8 shaft by Finnish loom maker Varpapuu. I couldn't find much current information on the maker, they might have gone out of business, so if you happen to know anything about them please feel free to point me in the right direction.

Here are my friends helping me with the set up, the one on the right is Rachael the Sparrow :-) 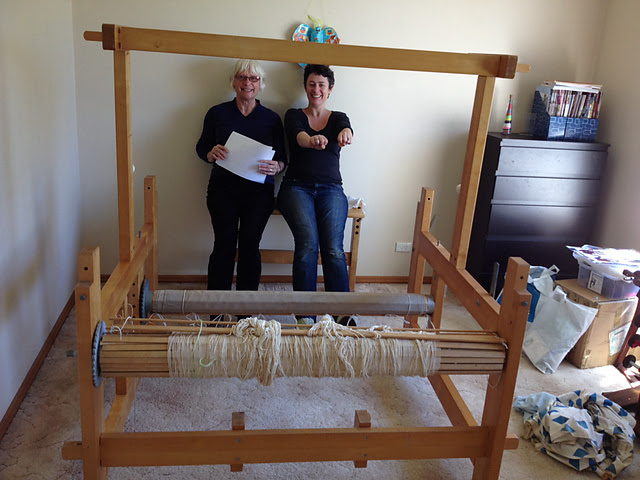 Actually just after this photo was taken Pamela (above left), who is a weaving guru, realised that we'd set the frames the wrong way around, so we quickly rectified that! 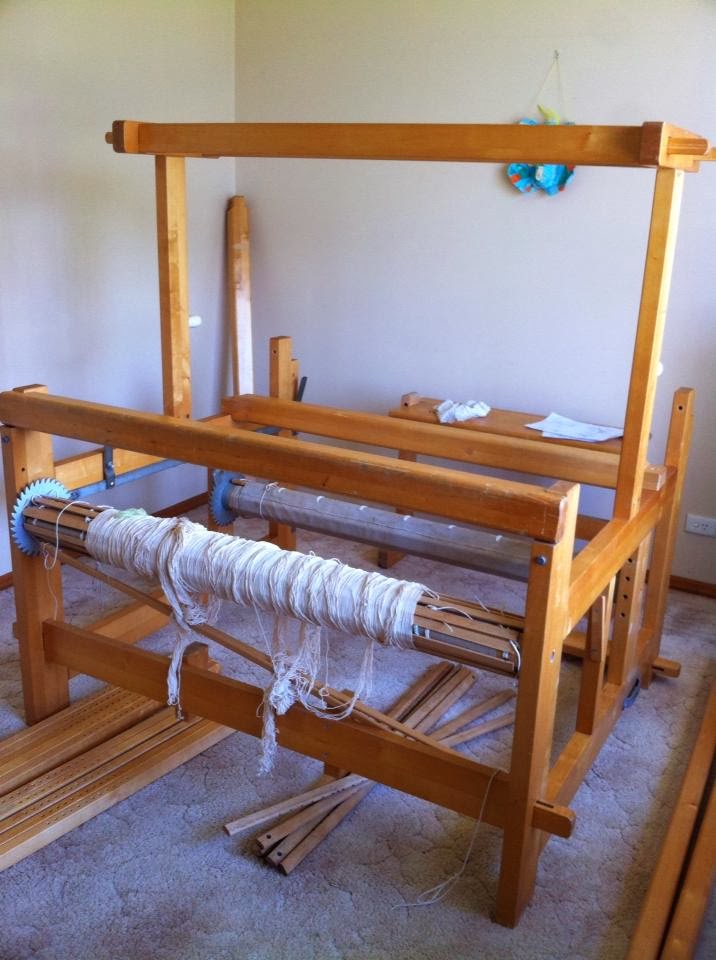 Now that's better! Unfortunately we couldn't go much further as we found that there were some bits and bobs missing to complete the assembly. I called the seller who is going to have a look for me when she get home from work. So looks like I might need to wait until we come back from our trip to complete the set up and start weaving. But that's ok, there's plenty to keep me occupied in the meantime :-)

And I'm really beginning to panic, one more week to take off!!!

Oh yes, there's some new stock just been added to our Etsy shop, use code XMAS13 at checkout to receive 10% off storewide :D

Now what have you been up to this week?