OK, so my travelogue is long overdue, I got a little slack... but I did do a Fibre Arts Friday post last Friday which covered a little of what we did on Day 30, that was when we met up with my yarny friend Vivian and her family. It was great spending time with friends, especially to finally meet someone you feel you know so well and yet you'd never met. Thanks to Vivian, Bill and Henry we got a taste of what Santa Cruz has to offer: yarn shops (I have to put this one first!), flea market, bookstores, record shop, cookies, the ocean, mini golf and the arcade, good food and beautiful weather. It's a lovely place to be.

The day of our visit was actually Phil's 50th birthday, which was partially the reason we're doing this big trip. The lucky guy got to wear his birthday badge (he managed to wiggle out not wearing the flashing one), and he got a candle on his pancake at lunch and everyone sang Happy Birthday, just so he could get properly embarrassed :P

We only had one day to visit San Francisco so we had to be very selective and only chose the things that ranked the top most on our list, which included Alcatraz, Fisherman's Wharf, cable car (tram) and Chinatown. 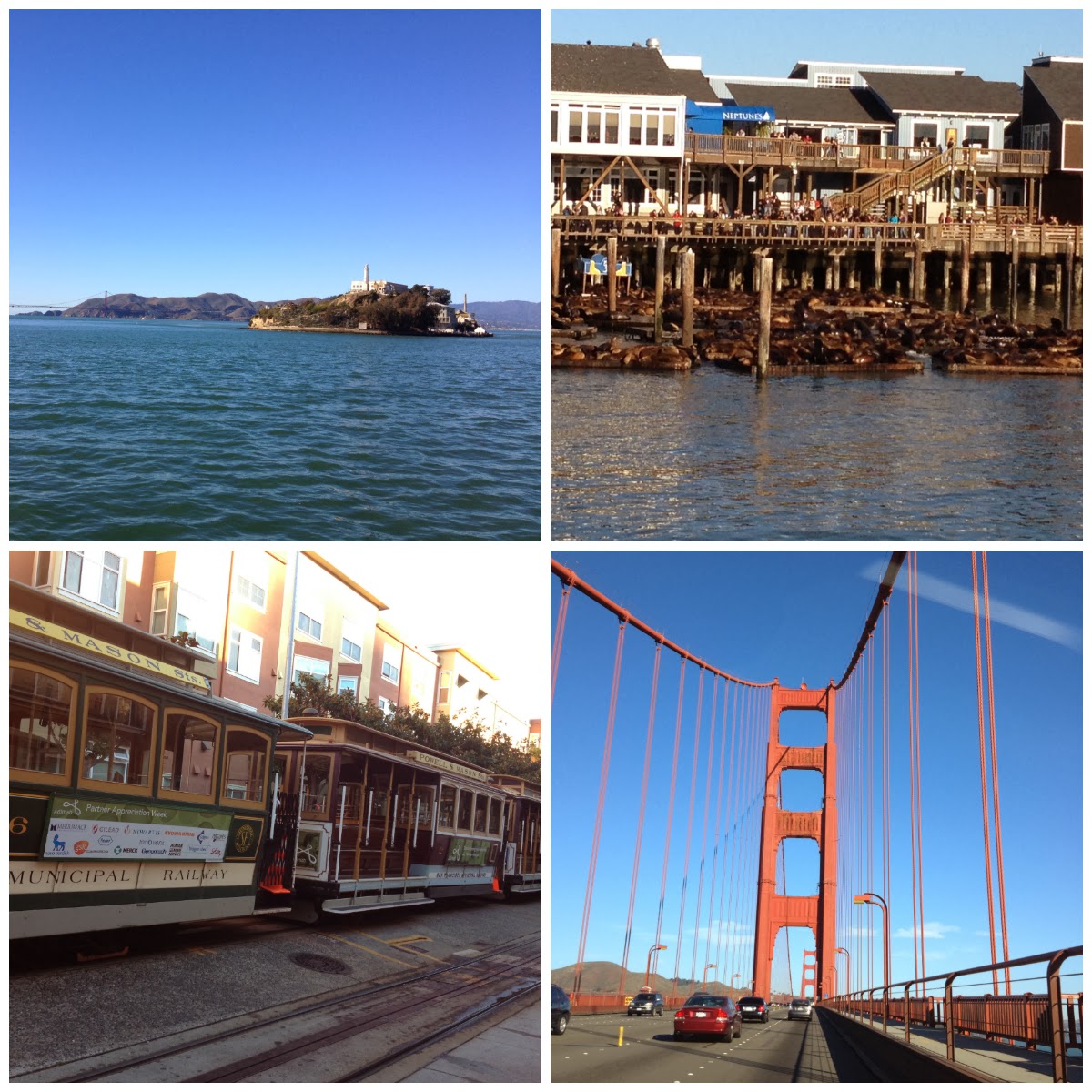 Alcatraz was worth every penny, we were lucky to get ticket on the day because it's the low season. Apparently in high season the tickets can be booked out 90 days in advance. So if anyone's visiting do make sure to check for tickets. The ticket includes return ferry to the island and audio tour, the audio tour is the best, it takes you through the entire jailhouse building from the cells to officers' quarters. The audio was narrated by ex-guards and convicts with tales of attempted escapes, sound effects and necessary pauses, it really brings the place to life.

We only got a glimpse of the Golden Gate Bridge on the ferry to Alcatraz, but as we planned to drive across it on our way to Seattle we didn't worry too much of getting a closer look. The bottom right photo above was taken when we drove across it, it was pretty impressive! 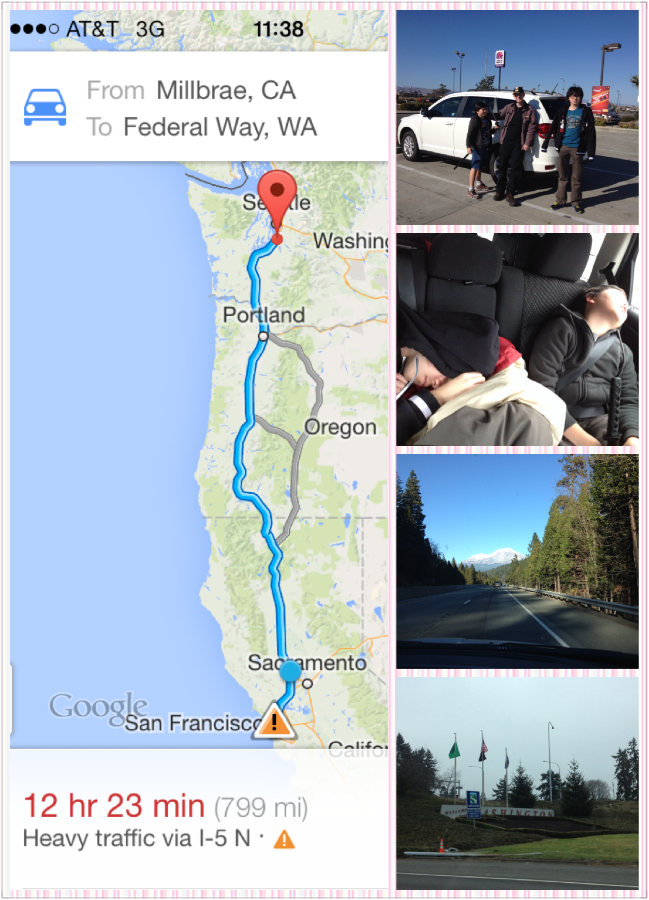 The drive to Seattle, well Federal Way actually, which is a suburb of Seattle was a long one and we did it in two days. We aimed for Eugene/Springfield on the first day, but there was a heavy fog when driving through Mount Shasta so we only made it to Roseburg. The following day we made a whistle stop at one of Portland's outlets to take advantage of some tax-free shopping before heading further north.

We are staying with my dear friend Elaine and family in Federal Way, who's making our visit very welcome. Her husband even played our private chauffeur driving us into Seattle and picking us up later on. 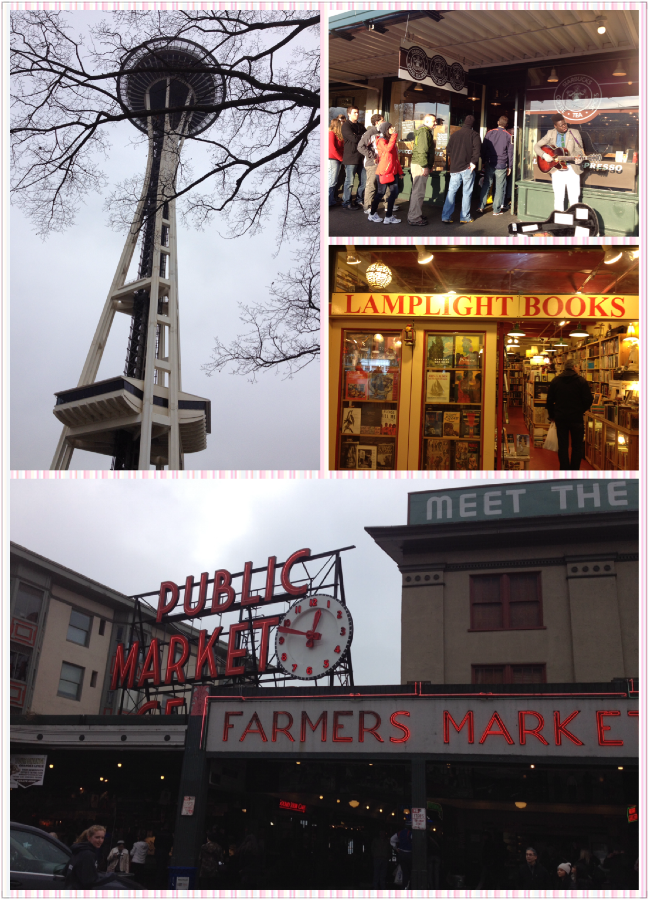 The Piker Place Market is a great place to visit, it has everything from fresh produce, fish and seafood, to cafes, bakeries, souvenir shops and crafts markets. There are also a couple of secondhand book shops and a map store which really caught Phil's eye, we had to drag him out of there, but not before he bought a big map of USA! Even J, who hasn't spent a penny so far on this trip, has found something (finally!) to part his money with: a magnetic travel chess set and a handmade ocarina. Of course we had to find the Original Starbucks whilst in Seattle, see above top right, the queue was so long and it was hardly moving, we didn't bother to wait. There was also a yarn shop but I was not impressed, there was a fair selection of yarns but the reception was cold which was a shame.

Today was our last day in Seattle and the last day in USA, tomorrow we will cross the border to Vancouver. Elli's biggest wish for this trip was to play in snow and he's been very disappointed so far, there was no snow in England, and we just missed it in New York, there was no chance of snow in San Francisco and there is no snow in Seattle. He thought he was going to go home disappointed but Elaine had a brilliant idea, there's a ski resort about an hour east of Federal Way and there's tubing! 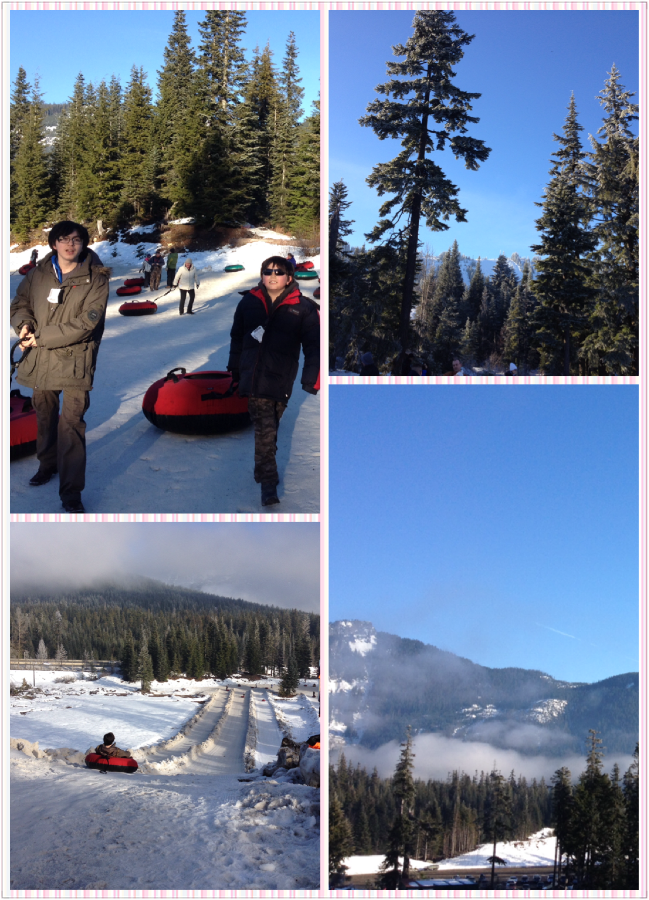 Tubing was a lot of fun, doesn't require any skills and hardly any risks, the boys all had a wonderful time. This was really the icing on the cake, for Elli at least!

I'd better sign off now, our bags are packed (yet again!) and all ready to go. See you in Vancouver!