If you don't know what "bush salute" is you've obviously not been to Australia in the warmer seasons, for those who do, well you know what I'm talking about!

Tuesday was Melbourne Cup day (the biggest race event in Oz), we are not big horse racing fans so we didn't bother to partake but welcomed a public holiday nonetheless. It was a fine day, especially after the freezing weather last weekend - yes that's Melbourne weather for you, up and down like a yo-yo! Anyway it was a beautiful day so we went for a walk around the Cherry Lakes, well when I say "we" that didn't include J who was having his usual teenager sleeping-in, it was just myself, hubby and Jelly. There were some pretty pink flowers in the meadows: 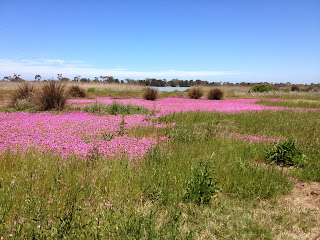 ...  pelicans flying in the sky (not a good picture, sorry!) 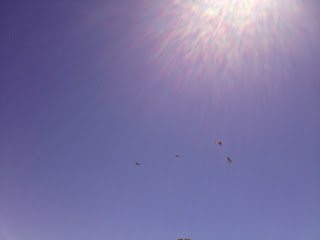 ... and of course the typical Aussie backdrop of gumtrees 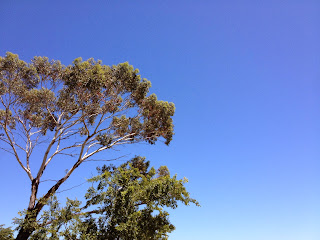 But where does the bush salute come in? Well, if you've ever been out and about on a warm day in Australia you are guaranteed to be greeted by swarms of flies, persistent flies. As Mr. Bryson testifies in his book Down Under or In A Sunburned Country depending which version you are reading:


... ... An Australian fly will try to suck the moisture off your eyeball. He will, if not constantly turned back, go into parts of your ears that a Q-tip can only dream about. He will happily die for the glory of taking a tiny dump on your tongue. Get thirty of forty of them dancing around you in the same way and madness will shortly follow.

And so I proceeded into the park, lost inside my own little buzzing cloud of woe, waving at my head in an increasingly hopeless and desultory manner - it is called the bush salute - blowing constantly out of my mouth and nose, shaking my head in a kind of furious dementia, occasionally slapping myself with startling violence on the cheek or forehead. Eventually, as the flies knew all along I would, I gave up and they fell upon me as on a corpse.

Luckily the flies that swarmed us didn't all find us that interesting, only one or two pursued us most of the journey, the rest found other more attractive victims to bother instead. Bryson's account might have been a little extreme but you get the gist, maybe I should get one of those cork hats ;)