Welcome to my Fibre Arts Friday! I've got a few things to share this week, first up is a flat cap I knitted for Jelly who is playing Dickon from The Secret Garden in his school play. The rest of the costume was easy, or so we thought... as it turned out, the boy did not possess a single pair of trousers that are not jeans, trackies or combats. And he couldn't raid his brother's wardrobe because they are not the same shape. Luckily we found some in Savers, and we managed to find a nice waistcoat from another charity shop, so we are good.

Anyway, the flat cap. The pattern is Morgan from Knitty Fall 2008. It it a relatively simple pattern, you start from the centre and gradually increase out, the front of the cap is shaped via irregular increases. But once you are done with the main knitting the rest of the shaping is a bit fiddly but not difficult. The pattern called for two popper fastenings to hold down the top of the cap, but I didn't like the way it looked so I took those out and sewn the front edge to the peak instead. It's looks much better this way, I think.

The photo was taken in haste before school on the day the costumes were due in... the boy desperately needs a haircut!

I can definitely say I have caught the weaving bug! I finished my second scarf, this time using my handspun. You might remember sometime last year when I was exploring dyeing and carding, I made some hand carded batts called "I dream of Monet", I used the yarn spun from that for the weft and a commercial sock yarn for the warp. 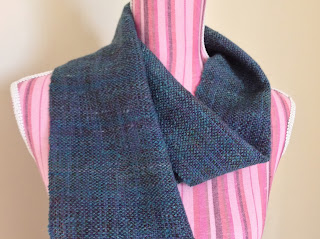 Oh and I finished the spinning commission I took from the Gisborne market, I was quite nervous while spinning it, hoping that I wouldn't mess it up. I think it came out alright :-)

Before I sign off, Cat & Sparrow is running a promotion on Facebook for 10% off everything in our Etsy shop. Just click on the Facebook link to get the Coupon Code. For folks on the other side of the planet, the exchange rate with Aussie dollars will work in your favour at the moment ;-)