Have you ever set yourself an alarm at 6:30am on a Saturday to go shopping? I have. Last week I learnt that Jenkins were releasing a batch of their Swan Turkish Spindles at 2pm Pacific time on Friday, which was 7am Melbourne time on Saturday (thanks Vivian for the pointer, I was quite confused otherwise). Now if you have heard of Jenkins you will know that their spindles have become quite difficult to get hold of, they now only release periodically and limit to one spindle per customer, and, if you have bought one in the last six months you are not eligible in the run.

Couple of my spinning friends have acquired some of these spindles before they became such hot cakes, and they were very impressed with the craftsmanship and how they spin. So when I heard about the release I set myself a quest to get one. I got up immediately when the alarm went (unlike most mornings!) and I stationed myself in front of the computer religiously refreshing the product page and (im)patiently waiting for the "for sale" button to appear. Then the clock struck and there was a mayhem, I clicked on the spindle I had chosen in the preview but by the time I logged into PayPal it was gone! So frantically I went back to the product page and found one that was still available, this time I was lucky. My word, I haven't seen such excitement for years!

So this is it - my Swan spindle in Queenwood 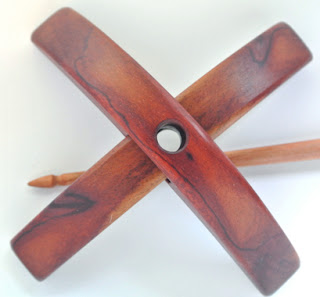 It hasn't arrived yet, the picture is plucked from the YarnTools.com website.

I got another toy this week - an Ashford Blending Board. It was supposed to be my birthday present in August, but a) they were released after my birthday; b) there was a stock shortage; so I had to wait. But I was content with that, anticipation is part of the fun :)

I've been eyeing one of these since last year when I saw some cool videos on YouTube, but those boards were all based in the US and the postage was horrendous. When I saw the blending board at the Ashford booth at this year's Bendigo show I knew I had to have one, DH was pleased that he didn't need to look far for my birthday present so it was a win-win :D

These are my practice rolags, the fibre was some white merino lap waste dyed with food colours. This is fun!