Phew, What a week! I'd travelled 1300km and visited 5 destinations across 2 states in the last 4 days with a Chinese delegation; then I attended a Committal's Hearing this morning which signaled that things were back to normal ;)

Before the long week began we went to a Folk Festival in a neibouring town last Sunday, where we all (Except J the teenager) tried our hands on a weaving loom - it was a knitter's loom by Ashford. It was a lot of fun!

On the left was my effort... as it turned out Jelly was a natural at weaving, he even showed his dad how things worked. I definitely want a loom now, the question is which one? Any suggestions? :)

Now before I show you what happened with my TdF I have to share with you this cool tutorial for making a DIY Turkish spindle. I wanted to bring a spindle with me so I could still spin while on the road, then I saw someone on Team Wonder who made a Turkish spindle with double pointed needles. After reading her comments I also did a search and found the tutorial linked above, the instructions were very easy to follow and I made one in 20 minutes, all I used was three bamboo skewers from my cupboard, it didn't cost anything - always a bonus ;)

As you can see from the progress photos below it "does what it says on the tin" - I love it! 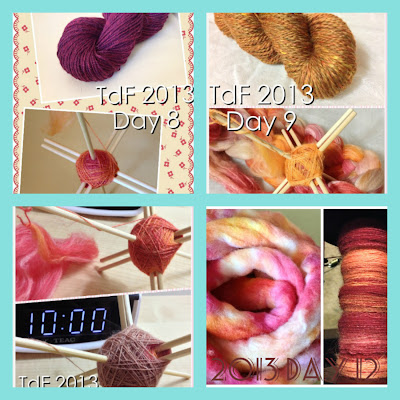 The photos show my efforts from Day 8 - Day 12 except day 10 which was a rest day. I came home for a pit stop on Day 12 so I was able to work on my wheel for a little bit. Day 13 was a total wash out as it was a long day (14 hours) of travelling/meeting/travelling, I only managed about 10 minutes or so on the spindle while waiting for the return flight, and there was no photo. Today is Day 14 but I'm not done yet ;)

Thanks for dropping by, there is more fibre arts fun at Wisdom Begins in Wonder. Indulge your creative side and join the party!
Posted by Cathy Johnson at Friday, July 12, 2013