Breaking Black: An Experiment (and what all those colours mean!)

When I wrote my last week's post I wondered if any of you would pick up on the hint of my possible travel plan, and sure enough some of you did ;-)  Yes, we are planning a trip, a big one, around Christmas/New Year time. As we are still finalising the details I won't say more until we have a definite itinerary, won't be long now (fingers crossed!) :)

This week I would like to share with you with some experiment I did on using black food dye. There is an interesting article on Breaking Black at DyeYourYarn.com. I've been wanting to try it for sometime, then I saw someone's wonderful result on Raverly and decided to have a go myself.

First I put some dry wool lap (leftovers from Bendigo Woollen Mills) in the crockpot and dropped some black food dye in small dots: 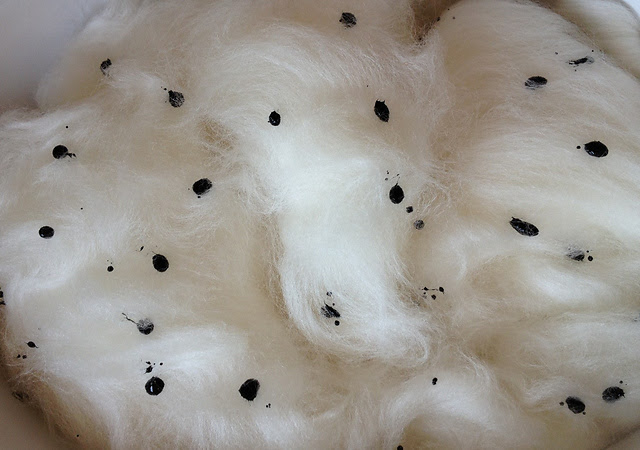 Then I started pouring diluted vinegar onto the wool, you can see the colours started to break already: 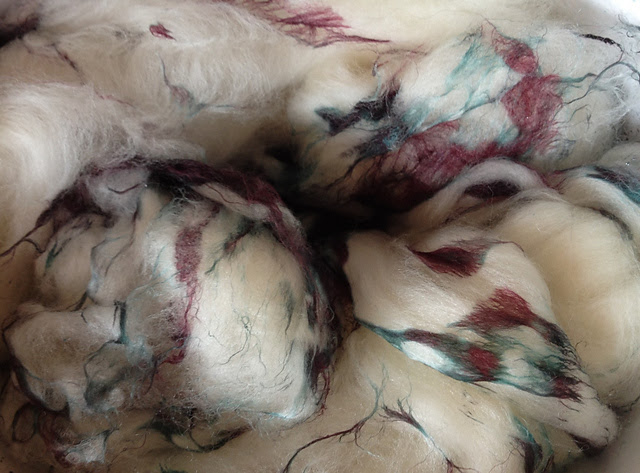 I set the crockpot to low just before we went to J's martial arts class, and by the time we got back (about 1.5 hours) the water in the pot was clear and here's the result: 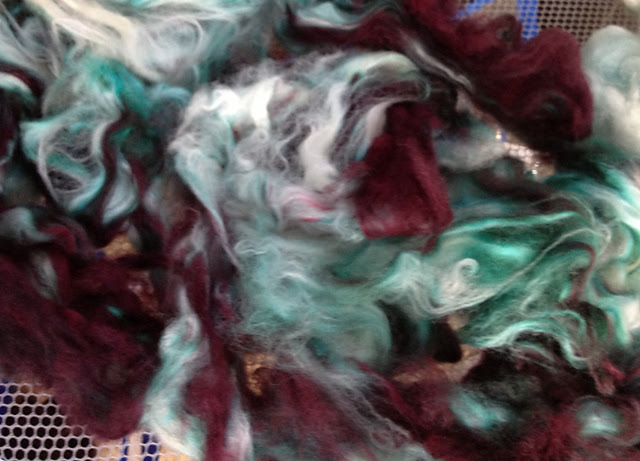 Now the reason for the colours to break is because there is no true black dye, all blacks are a combination of other colours. For my experiment I used Queen food colour black. The label lists colours 123, 102, 133. A little research turns up the following findings:

Colour 123: also known as Amaranth, FD&C red 2 or E123, it's a dark red to purple colour. Traditionally it was made from Coal Tar, the modern ones are more likely to be derived from petroleum byproduct. It is banned in the USA but still legal in many other countries - evidently it is legal in Australia!

Colour 102: also known as Tartrazine, FD&C yellow 5 or E102, it is a common yellow food colour and it's derived from petroleum. You can find this in many food items such as ice cream, candies, soft drinks, snacks and cereals, etc. There are some findings linking certain allergic reactions to this colour, in some cases children with asthma could have a bad reaction, it's also been linked to hyperactivity in children.

Colour 133: also known as Brilliant Blue FCF (blue 1) or E133, it is derived from... surprise surprise! petroleum. This colour was previously banned in many European countries but now has been ruled as legal by the EU. It also has been linked to causing a reaction with asthma.

If you are interested to learn more about these colours you can click on each name which will take you to the Wikipedia site (ok Wiki is not the authority on sciences but it's good enough for a layperson like me), or you can conduct your own research. Frankly it does not make cheerful reading, I don't know about you but I think the best use for these colours is on fibre and yarn. Smarties anyone?

Thanks for dropping by, there is more fibre arts fun at Wisdom Begins in Wonder. Indulge your creative side and join the party!
Posted by Cathy Johnson at Friday, March 22, 2013