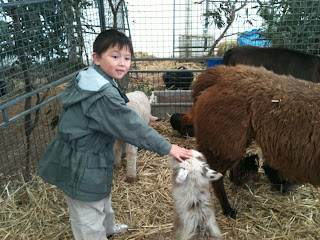 We missed the Sheep & Wool Show last year, so for this year I marked the dates on the calendar so that not to miss it again this year. Unfortunately we could only make it on the last day which was last Sunday, the day started off sunny when my younger son played his usual Sunday football match, but by the time we arrived in Bendigo it turned overcast, but there was so much going on we hardly took any notice of the weather.

My little boy had a lovely time in the little patting zoo with baby lamb, alpacas, chickens, ducks, turkeys and a calf. He loved feeding the animals, one of the alpacas even had it's nose in the feed bag he was holding; but he didn't like being trod on by the little (but certainly not light) calf. 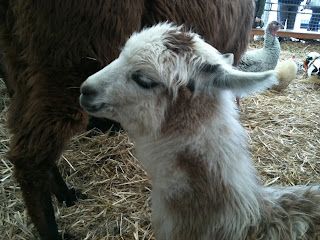 <- one of the three alpaca in the patting zoo, isn't she beautiful!

I, on the other hand, wanted to see alpacas. I've often admired how lofty the alpaca wool felt, and I have heard how they were such gentle animals; but I have never seen one up close. There were three alpacas in the patting zoo and they were very patient with all the children fussing about them. As soon as I put my hand in their fleece I was in love, their fleece was sooo soft and fuzzy and warm, I wanted to caress them all day! 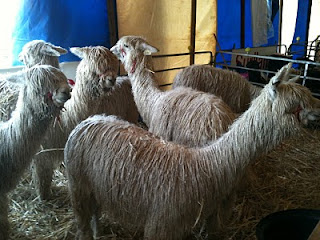 And we found a lot more alpacas in several other tents.

Suri alpacas (they have long hair) -> 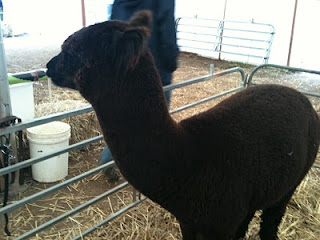 <- The colour of this baby reminded me of rich dark chocolate. 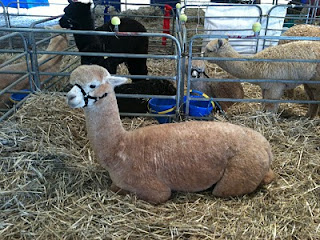 The colour of this one is actually of golden honey, but I couldn't get it to show on camera.  -> 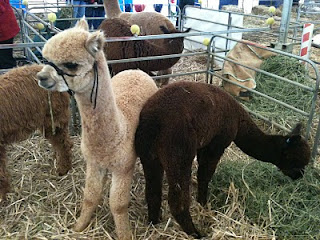 Ok, I was bit over-enthusiastic about alpacas, but they are just too cute! We got to chat with one of the breeders and he told us that alpacas are hardy animals and are very easy to look after. They like being in a herd and they seldom get diseases. Oh, and they are head-shy, which means if you want to pat them you shouldn't raise your hand in front of their eyes or you will startle them.
I wondered if I could keep a pair of alpacas for pets ...
Of course, no self respecting knitter would ever go to a wool show without acquiring some new stash, it would have been a waste of opportunities! But there were so much to choose from, I wondered from booth to booth, sinking my hands in wonderful skeins of silk and wool and taking mental notes of all the possibilities, but temptations were everywhere and I couldn't make up my mind. Then one particular booth caught my breath and stopped me in my breath, bundles of hand dyed skeins piled on the tables, each of unique colours, I picked up a skein to savour it's delicious colours, only to be drawn to another, and another... I battled with myself, we were suppose to be saving money right now because we were going on holiday in September, but I couldn't move! 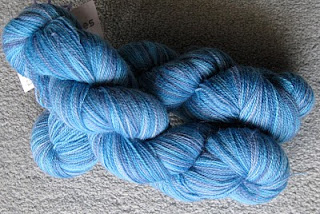 After much deliberation I decided to be good and not to go too mad, and settled on these ...  they are hand dyed 4ply from Waratah Fibres, I was lucky that there were 2 skeins of the same lot, and the lady even gave me a free scarf/shawl pattern :) 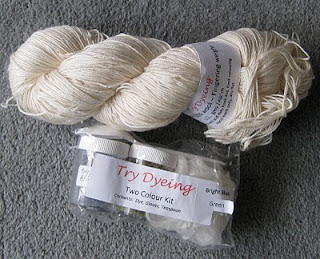 Before we left, we visited the Kids Korner and my son saw a lady and had his personalised spider made for him. While waiting I was drawn to a booth by Try Dyeing - I've always wanted to try dyeing my own wool and this booth had read my mind! I bought a skein of 50% silk/50% wool fingering yarn and a two colour kit complete with spoon and gloves, and of course instructions on how to proceed. But I was also pleased to find that they had blocking wires for sale and at only $20/set. So I had to have them and a little tub of blocking T-pins.

It was a exhausting day but I was happy as Punch!!
Posted by Cathy Johnson at Tuesday, July 20, 2010