I still can't believe we are actually in New York, the Big Apple. It's a place one dreams about coming, but being here just makes me speechless. The city is very much full of life, everywhere you turn you sense the energy that make up "The Empire State of Mind", it's everything I'd imaged it to be.

Our stay is very short, only three full days so we had to make the most of it. 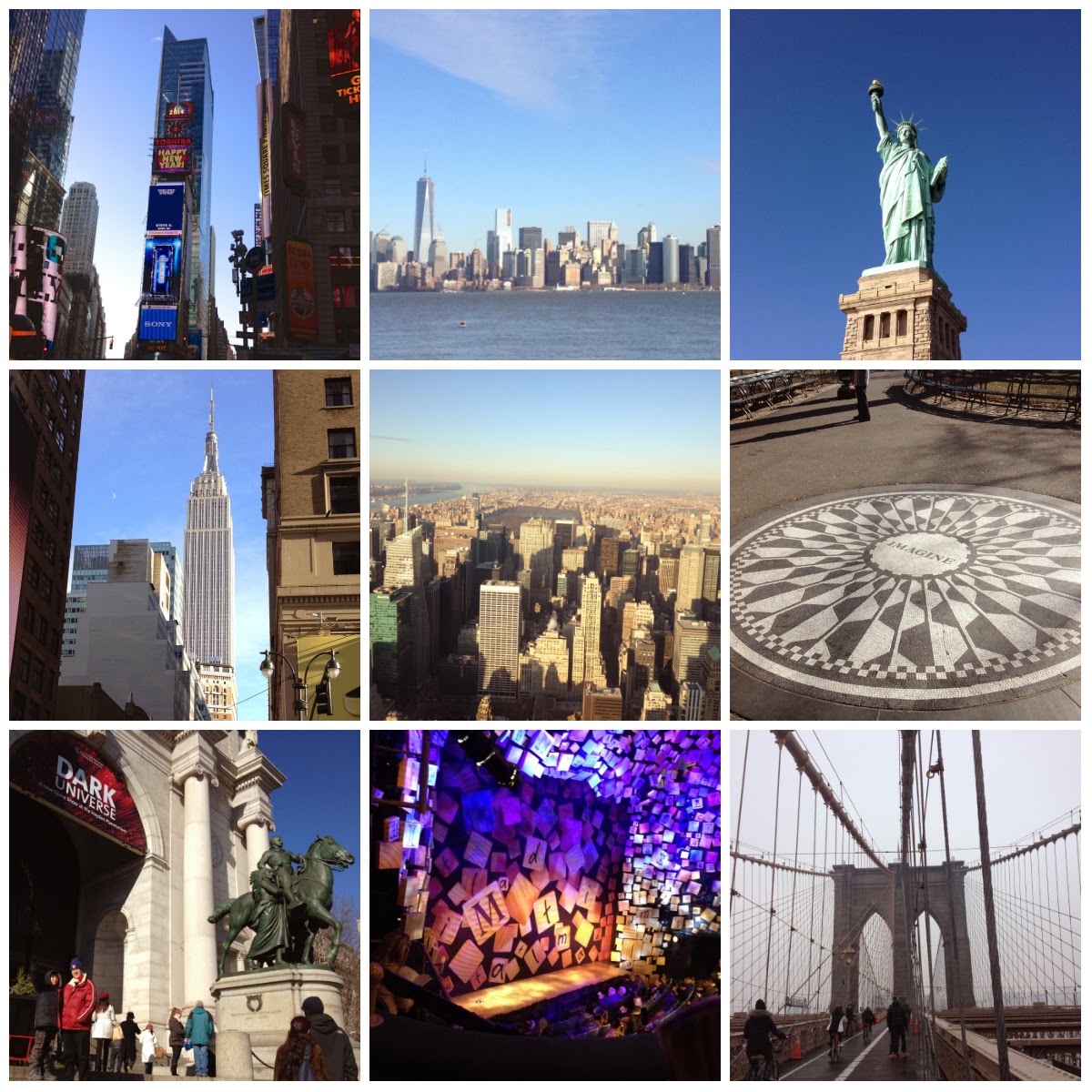 Day 1: We went to the Statue of Liberty, unfortunately there was a burst pipe the day before due to the deep freeze so we could only walk around the grounds, but it was still amazing and you get a fantastic view of Lower Manhattan across the water. Then we went to the 9/11 memorial and Empire State Building, we even climbed from floor 80 to 86 because there was such a long queue for the lift/elevator.

Day 2: We walked through Central Park which is only three blocks away from our hotel (Wellington) on 7th Avenue. We found the Strawberry Fields that commemorated John Lennon's life (middle right in the collage above), it's a mosaic arrangement with the word "IMAGINE" at the centre. Then we went to American Museum of Natural History that was featured in the "Night at the Museum". The museum is 10 times better than the movie, we could've easily spent a whole day there. But we wanted to watch a Broadway show so we left early to have dinner underneath the Grand Central Station. OK, maybe it wasn't such a good idea to trudge through the Grand Central during rush hour on a weekday, but we did get a glimpse of what is like in it's true grandeur. Then we made our way to Time's Square and managed to secure four seats for "Matilda the Musical" even though we had to be split up. The show was fantastic, I highly recommend it to anyone who is interested in theatre both young and old and anywhere in between. It's based on the same book by Roald Dahl but with a modern flavour, great music, great choreographic, gripping storyline and a brilliant cast. I guarantee you will have a fabulous time... can you tell I love it? ;)

Day 3: Our last day in this fascinating city. The boys were feeling a little worse for ware - J with his deprived sleeps and Elli feeling his sore feet (he's a little flat-footed), so that just left P and myself wanting to fit in more. We went to the Brooklyn Bridge, Wall Street and the Vietnam War Veteran's Memorial. There was a consistent drizzle so we didn't linger too much, also we needed to pack our bags again as tomorrow we fly to San Francisco to continue our journey there.