I feel a bit deflated after all the excitements of the London 2012 Games, the closing ceremony was somewhat disappointing if you ask me. But I did like the part where Freddie Mercury popped up on the big screen and got the crowd going, wasn't he fabulous! Brian May's solo was also fantastic, they are true legends.

At the beginning of the Ravellenics I entered three projects which were blogged here and here, then as a last minute madness I decided to finish one of my WIPs that's been hibernating for a while, and here it is: 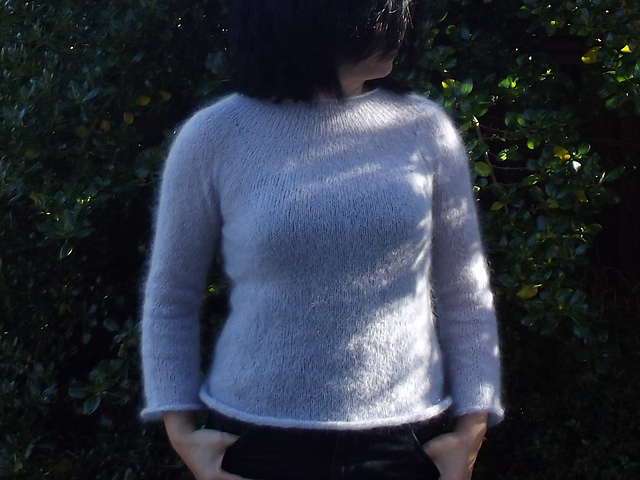 I called it Mohair Minimalist Pullover, a mod version of the Mohair Minimalist Top. It's just plain stocking stitch knitted from top-down and it's seamless without any finishing, just cast off, weave in the ends and Hey Presto! It was started in April and should've been finished ages ago, but I got distracted and it went in hiding with one sleeve to go, if it hadn't been for the Ravellenics it might not see daylight for some more months yet.

This week I started a project for my mum whose birthday is in October. She likes geometric shapes especially if it involves circles or portions of a circle, so I thought she might appreciate this one. The pattern is from DROPS and calls for two strands of their yarns, but I have this beautiful Shadow Tweed in my stash and the gauge was spot on (yes, I did swatch this time!). As you can see the two front pieces are done, the back piece may not be so quick as it's just plain stockingnette. I'm taking a leap of faith on this one and hoping fervently that the assembled piece is wearable! Today is my birthday, I'm not into birthday celebrations, not since I hit 30 anyway and that was a lifetime ago! The old man has been asking what I wanted for my birthday and I told him that I wouldn't mind learning to spin. See I used "wouldn't mind" - it's a typical expression that runs in P's family, it means "Yes! I really would love that!" - shows I've been married for too long, ha!  Anyway, he said "why not, go for it!" So I did.

I found an Introduction to Hand Spinning course run by the Handweavers and Spinners Guild of Victoria, the classes run over five weeks and cover contents from fleece preparation, wheel adjustment, to different types of twist, fibres and dyes. The classes were due to start last Wednesday, but I got a phone call a few days before telling me that the classes were cancelled due to lack of enrollment. I'm sure you can imagine my disappointment.

But, life has it's ways of working things out. This morning I got this present from P: Isn't he sweet! The old man's mellowing with age and learning to be romantic... just hope I can handle this little thing and don't get my wits into a twist!

As I was typing this post I got another phone call from the Guild informing me that the Introduction to Spinning classes will run again starting in September and would I like to join? Oh Yes Please!

So, to quote The Best Exotic Marigold Hotel - "Everything will be all right in the end. If it's not all right, then it's not the end." - Happy Fibre Arts Friday! :-)

Thanks for dropping by, there is more fibre arts fun at Wisdom Begins in Wonder. Indulge your creative side and join the party!
Posted by Cathy Johnson at Friday, August 17, 2012