I visited a sheep farm with my spinning friend Deb on Monday, it is a small farm in the Macedon Ranges called Fairfield Finns. They have around 130 sheep and specialise in Finn sheep and Finn crosses. The owner Maureen is a lovely lady who took us to the field to meet her flock which is guarded by two gorgeous looking alpacas, some of her sheep are coated so the fleeces from these sheep are nice and clean. She also took us to the wool shed where she stores her fleeces, as it's spring in Melbourne her sheep have just been shorn. She has all these fleeces hanging up in pillow cases (to let them breath and to prevent moths) as you can see here: 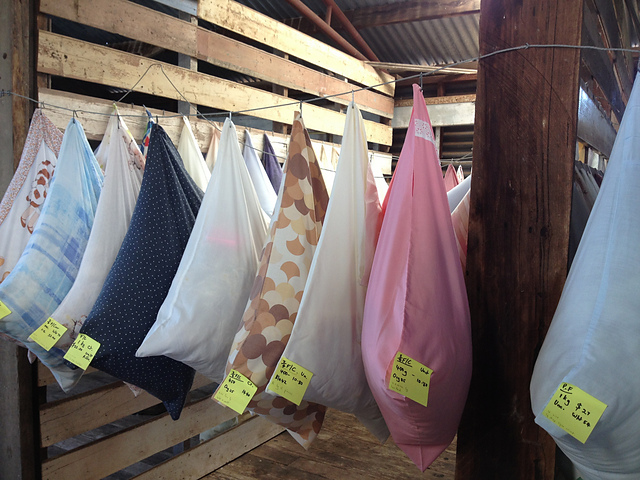 Maureen is very organised, every pillow case has a label with the breed of sheep, weight of fleece, colour(s), staple length, price and a code to indicate which sheep it's from. We were encouraged to look around and spread out the fleece on a table if we saw something that we might be interested. Maureen insisted that we should check out the whole fleece and feel it before we made a decision, but making a decision was the hardest part because all her fleeces were just so gorgeous, it was really hard to choose from. I'm sure if we were able, physically and financially, Deb and I would have gladly taken a lot more! In the end Deb chose seven and I chose six, mine were three coloured and three white. I won't bore you with photos of bags of wool but I would like to show just one: 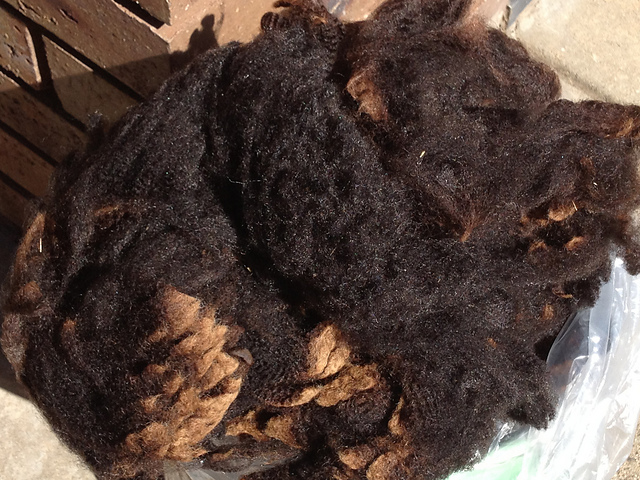 I got two bags of this lovely black fleece, both from the same sheep and totaling 1.7kg. Maureen was disappointed with the brown tips as the fleece came from a coated sheep, she thought that the coat would prevent the sun bleaching the tips. But I love it! I think once spun up it's going to be beautiful. My plan is to make a jumper for the old man, I don't often knit jumpers for him because, well, men's jumpers take too long to make. But he's turning 50 (shhh!) in a year's time so I thought I'd make him one with my handspun. I don't know how long it will take but at least I have a head start :)

Other than my little fleece hunting adventure life ticks along, but this week I was reminded of something important by my little man Elli. I was experimenting with dyeing (of course!) and I thought I'd try a semi solid effect, and I followed the instructions from Teach Yourself Visually Hand-Dyeing by Barbara Parry, which involves making up the dye at a certain temperature and dip the prepared yarn in the dye bath to allow certain colours to strike first before simmering it. Sounds easy enough but my yarn didn't come out as I envisioned, it came out all uneven with light and dark patches... 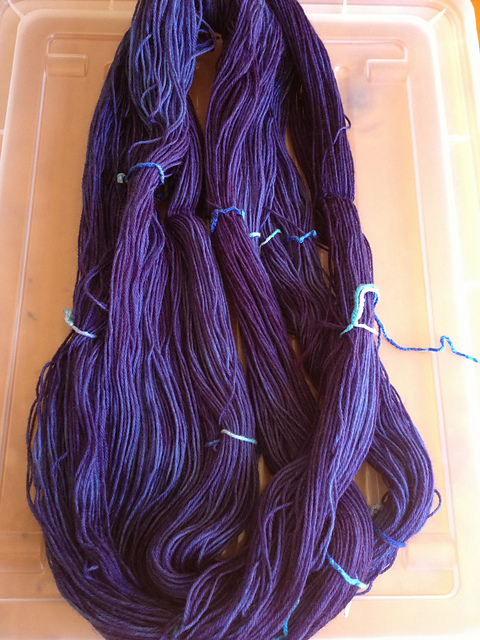 ... so I was grumbling to myself when Elli said to me: "Be happy with what you have Mummy, because we're lucky." So we are, my dear boy, so we are! On that note, I wish you all good day and have a nice weekend!

Thanks for dropping by, there is more fibre arts fun at Wisdom Begins in Wonder. Indulge your creative side and join the party!
Cathy Johnson at Friday, November 23, 2012
Share